Jon Cohen ’90, co-CEO of Cornerstone Promotion, will present a lecture on Tuesday, Jan. 25, at 6:45 p.m. in the Lender Auditorium, located on the concourse level of the Martin J. Whitman School of Management building. The lecture is part of the Bandier Program’s Soyars Leadership Lecture Series in the College of Visual and Performing Arts’ (VPA) Rose, Jules R. and Stanford S. Setnor School of Music. 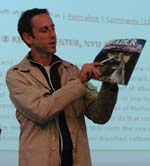 A recognized expert on all things pop culture, Cohen has the innate ability to subtly, but effectively, make clients’ messaging a part of the everyday vernacular. Utilizing unconventional immersion marketing techniques, he knows how to create “buzz” from the inside out that successfully elevates brands to cult status.

A graduate of the S.I. Newhouse School of Public Communications, Cohen partnered with high school friend and music promotions whiz Rob Stone at Cornerstone in 1997. Together they successfully apply their collective music marketing savvy and knowledge of what’s hot now to launch emerging brands and re-energize such high profile consumer brands as Mountain Dew, Microsoft, Levi’s, Converse and Red Stripe.

In 1998 Cohen and Stone launched the FADER, an ahead-of-the-curve culture magazine that the New York Times has labeled a “music and fashion bible.” The FADER has been credited with launching the careers of such A-list artists as Eminem, the Strokes, the White Stripes and Kanye West. Cohen and Stone also launched FADER Films in 2003.

Prior to Cornerstone, Cohen served as vice president of Columbia Records’ alternative music department, where he championed such alternative artists as Alice in Chains and Jeff Buckley and was instrumental in shaping their commercial success.

For more information about the lecture, contact David Rezak, director of the Bandier Program, at (315) 443-3280 or dmrezak@syr.edu.