Eileen Jevis, public relations manager at University College of Syracuse University, was recently awarded the Commander’s Award for Public Service by the U.S. Army. The award recognizes exceptional public service that contributes significantly to the accomplishment of the mission of an Army activity, command or staff agency.  Jevis coordinated the University’s Veterans Day Ceremony on campus on Nov. 11, an event that included a major program in SU’s Hendricks Chapel with Whitman School of Management Dean Melvin Stith delivering the keynote address. This was followed by a wreath and flag ceremony on the Quad, and a luncheon for 250 people.  A special guest at the event was well-known country singer Michael Peterson, who sang the National Anthem and his popular solo “You Could Hear a Pin Drop” in Hendricks Chapel.

The Commander’s Award is the fourth highest honor the United States Department of the Army can bestow upon a civilian, ranking directly below the Outstanding Civilian Service Award. It can only be approved by a commander with the rank of colonel and above. Lt. Col. Susan Hardwick, commander of the Army ROTC program at SU, nominated Jevis for the award. 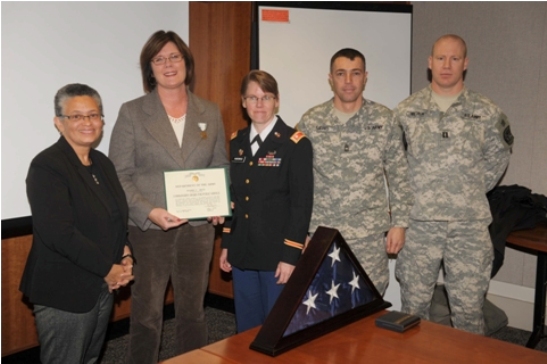 “Eileen’s leadership in executing this first ever Veterans Day Ceremony at Syracuse University created an awareness about veterans on campus and allowed the University to honor those who serve in the military,” says Hardwick.”The ceremony was extremely well done, honoring past and present veterans of Syracuse University in a very respectful, dignified and moving way. Eileen’s passion, energy, and work ethic in organizing this event were tremendous.” The award was approved and signed by Col. Glenn H. Goldman of the 2nd (Freedom) Brigade at Fort Dix, N.J.

Hardwick, a career officer, Iraq War veteran, and chair of the Department of Military Science at SU, noted that Jevis had no precedent from which to draw plans and ideas for the event. “Everything had to be done from scratch,” says Hardwick, “but she was able to bring together many different people on campus for committee meetings, which resulted in a very successful program. Already there is talk about planning for next year’s Veterans Day Ceremony. Eileen has started a legacy at Syracuse that will now be an annual event.”

Jevis, a Camillus resident who joined the University College community five years ago as public relations manager, expressed gratitude for the extraordinary tribute. “I am humbled and honored to receive such a prestigious award,” she said. “I accept it with great appreciation for the recognition that must be shared with so many others across campus who assisted in the planning and execution of this inaugural Veterans Day event.” She added, “It is very gratifying to be able to honor the students, faculty, and staff who have served our country with such allegiance. To witness their pride of country, dedication to mission, and willingness to sacrifice is truly humbling. They are the ones who deserve our thanks.”

Jevis noted that she received assistance and guidance from various departments on campus as the event planning progressed, especially from Hardwick, her staff, and the ROTC units on campus.  “I learned a lot about military protocol and was impressed with the depth of knowledge I found right on campus,” says Jevis. “It was a pleasure to work with Lt. Col. Hardwick and members of the ROTC. In the true spirit of collaboration , the Office of Special Events, the Marketing Department at University College, and many others came together to make the event successful and memorable.”