‘Holidays at Hendricks’ to be broadcast on WCNY 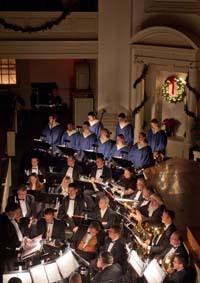 The 90-minute concert took place on Dec. 5 in Hendricks Chapel. It will be broadcast for the fourth year through a unique collaboration between SU and WCNY.

DVDs of the performance/broadcast will be available at the SU Bookstore in the Schine Student Center.

During the concert, the three groups performed both individually and in combination. The choir was directed by John Warren, the brass ensemble by James Spencer and the handbell ringers by Emily B. Cirillo. University Organist Kola Owolabi provided accompaniment, and soprano Laura Enslin performed with the SU Brass Ensemble on a selected piece.

The Hendricks Chapel Handbell Ringers performed “Christmas Tapestry,” “The First Noel” and “Carol of the Bells.”

For the finale, the groups combined with Owolabi for Mack Wilberg’s “Jubilate Deo.” The concert closed with the traditional candle lighting and singing of “Silent Night.”

The SU Brass Ensemble, housed in SU’s College of Arts and Sciences, is composed of members of the SU faculty and staff, SUNY Upstate Medical University faculty and staff, and accomplished musicians from surrounding communities. The SUBE presents about 18 performances per year. The ensemble’s repertoire includes music from all major musical periods and often features new compositions commissioned by nationally known composers.

The Hendricks Chapel Handbell Ringers is a group of students, faculty and staff from the SU community. The ensemble rings five octaves of Schulmerich handbells and four octaves of Schulmerich MelodyChimes. The Handbell Ringers perform at the Protestant Worship Services in the chapel throughout the academic year, as well as at other churches and venues throughout Central New York.