The importance of publicly engaged scholarship in the humanities is the subject of a new book by Harvey Teres, associate professor of English in Syracuse University’s College of Arts and Sciences. “The Word on the Street: Linking the Academy and the Common Reader” (University of Michigan Press, 2010) is a timely look at the disjunction between the study of literature in the academy and the interests of the common reader and society at large. 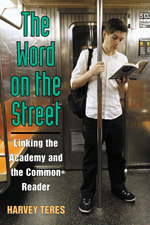 “In the past few decades, English departments have produced a generation of aesthetic illiterates by neglecting the art of literature in the classroom and, thus, the sensibilities and capacity for judgment among students,” argues Teres. “The academy has also produced far too many academics who write for other specialists, while ignoring the public and its needs. All this has taken place while the humanities have lost ground in our schools and in public life.”

“The Word on the Street” is made up of several compelling chapters, including “Post–9/11: Why the Public Needs Literary Critics,” which looks at how The New York Times famously mishandled Joseph Conrad’s and Henry James’ writings about terrorism and counterterrorism. Also, there are chapters devoted to heretofore neglected book reviews that Lionel Trilling wrote for the New York Evening Post, as well as Mary McCarthy’s and Susan Sontag’s musings on the intersection of beauty and politics. “These people were public intellectuals who wrote about books with subtlety, style and commitment for a broad public audience,” says Teres.

Another chapter outlines Teres’ efforts to take literature “into the streets” with such interactive events as “Poetry Palooza.” He recalls one weekend at Syracuse’s Carousel Center, where more than 100 passersby read aloud their favorite poems, as well as created original works using refrigerator word magnets: “It was a fun way to use poetry to engage the community,” he says.

“The Word on the Street” concludes with a series of conversations with local citizens—including an auto restorer, a community choir director, a labor organizer and a dancer—about their encounters with beauty. “Their words show us the central importance of craft, beauty and aesthetic judgment in our lives—things that are too often neglected in our classrooms,” he adds.

Already, “The Word on the Street” is creating a stir in the academy. SU Chancellor Nancy Cantor calls the book “lively and thought-provoking. It invites humanities scholars to move beyond the classroom and the monograph to share the pleasures of art in ways that engage the intelligence of the common reader, cultivating the critical imagination so vital to American cultural democracy,” she writes.

Julie Ellison, professor of American culture at the University of Michigan, stresses the book’s timeliness. “At a moment when questions about the literary, bookishness and future of print are being urgently raised, Teres’ examination of both common and academic readers makes a real contribution to the debate,” she adds, praising his writing as “tough-minded” and “broadly democratic.”

Critics agree that “The Word on the Street” is a bold response to the current malaise in literary studies. “Innovative” and “accessible” are among the adjectives that frequently appear in reviews.

For more than two decades (first at Princeton University, then at SU), Teres has used university-community partnerships to create fruitful, reciprocal exchanges in which “expertise is on tap, not on top.” Witness his recent work with the University Senate’s Academic Affairs Committee, through which he helped usher in the new University tenure policy for publicly engaged scholarship. Teres has also chaired SU’s Humanities Council and the Imagining America (IA) National Conference Organizing Committee, the latter of which supports public scholarship in the arts, design and humanities.

The former Fulbright Scholar is first to admit that his work is far from done. “We have not approached the realization of [Ralph Waldo] Emerson’s or [John] Dewey’s vision of a highly participatory American cultural democracy,” says Teres, author of the critically acclaimed “Renewing the Left: Politics, Imagination, and the New York Intellectuals” (Oxford University Press, 1996). “Such a culture requires critics who are read by the average citizen. The migration of critics and intellectuals from the public to the academy has resulted in fewer efforts to engage with ordinary citizens.”

In addition to serving on the English faculty, Teres is director of the Judaic Studies Program. His expertise in Jewish-American literature is a natural extension of his work in American cultural criticism. “I am thrilled that Harvey Teres is leading the Judaic Studies Program,” says Arts and Sciences Dean George M. Langford. “He is a highly regarded scholar, teacher and administrator whose professionalism embodies our vision of scholarly excellence.”

“The Word on the Street” is the second installment in a groundbreaking, new series put out by the University of Michigan Press, titled “New Public Scholarship.” More information is available at http://press.umich.edu.