Martin B. Forstner, a biophysicist in Syracuse University’s College of Arts and Sciences, received a prestigious, five-year, $795,000 National Science Foundation (NSF) Early Career Development (CAREER) Award to further his research in understanding how the laws of physics influence the organization, structure and function of cell membranes in living organisms. 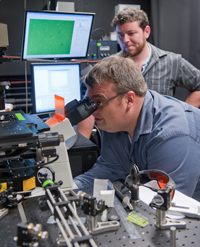 The award will also support the development of teaching materials and laboratory demonstrations in the areas of biophysics and soft condensed matter physics that will be used in selected Central New York high schools. Forstner, assistant professor in the Department of Physics, will work with graduate students to develop the materials and help teachers incorporate the new units into their curricula. Additionally, the NSF funds will support summer internships for highly motivated high school students to work in Forstner’s lab.

Forstner works in a relatively new area of biophysics that seeks to apply the principles of soft condensed matter physics to biological systems. Soft matter includes liquids, gels and foams, as well as biological materials, and is found in everything from packaging materials and adhesives to detergents, lubricants, cosmetics, and food and fuel additives.

“We can construct hard materials, such as semiconductors, that are based on fixed crystal structures, which are not fluid,” Forstner says. “Imagine if we could exploit the physics of soft, biological systems to build new technologies and drugs that could adapt and respond to the surrounding environment.”

Specifically, Forstner studies how lipids (fatty molecules) reassemble, move and reorganize on the surface of living cells. Lipids form an essential barrier, called the cell membrane, which controls the movement of materials in and out of cells. Lipids can also move within membranes; this property enables cells, and structures within cells (called organelles), to have a fluid surface, change shape and move. Lipids are also thought to contribute to the dynamic restructuring and reorganization of other molecules found in cell membranes, but little is known about how this process works.

However, cell membrane organization is intimately connected to the way cells function. A growing body of evidence suggests that malfunctions in cell membrane organization contribute to a number of diseases, including Alzheimer’s disease, as well as cancers and autoimmune diseases. A better, scientific understanding of the physics of cellular systems under normal circumstances could lead to new avenues for treating these diseases as well as to the development of new kinds of materials.

“Much of our current understanding of cell membranes is derived from looking at the biochemical pathways, proteins, and enzymes that control the movement of materials within and across the membrane,” Forstner says. “What has not been strongly considered is the dynamic processes that occur because of the physics of the system, which are not tightly controlled by enzymes and proteins. There is much to be learned by looking at biology from a physics perspective.”