Seeking refuge from ongoing military conflicts in their home country of Sudan, Mary Mayom and her five children spent eight years in refugee camps in Kenya and Nairobi before coming to the United States through the United Nations Refugee Agency.

Mayom and her family arrived in Connecticut in 2001 and Mayom secured a job as a part-time housekeeper at the YMCA. It was difficult for her to support her family working part time. “I came to Syracuse for the celebration of the Sudanese Independence Day,” says Mayom. “Things are different here than in Connecticut. I have an American friend here who took me shopping. The grocery stores are cheaper and there is a church here I could attend. I have found a sense of congregation here.”

Mayom found a job at a local hotel, but during the winter months when business was slow, her hours were cut to two days a week. She applied for and received a housekeeping position at St. Joseph’s Hospital. After working nine months on a part-time basis, she was hired as a full-time employee.

Flora Ayobo and her three children migrated from Southern Sudan to Northern Sudan trying to escape violence. She and her family were transported to a refugee center in Cairo. She was fortunate to find work as a housekeeper for the German Consulate in Cairo, where she worked for three years, before being sent to the United States through the U.N. Refugee program. Like Mayom, Ayobo was hired by St. Joseph’s Hospital in the housekeeping department.

Both Mayom and Ayobo were exemplary employees, but felt they could do their jobs even better if they could acquire stronger reading and math skills. When St. Joseph’s volunteered to participate in a pilot Vocational English Second Language program sponsored by the Greater Syracuse Chamber of Commerce/CenterState CEO, both jumped at the chance. After eight weeks of basic English Second Language Instruction provided by the OCM BOCES, Mayom and Ayobo, along with five other employees, were selected for advanced Vocational English Language Instruction delivered by the WorkKeys Center at Syracuse University.

The WorkKeys Center uses an online, self-paced, independent learning curriculum developed by WIN Inc., based on the WorkKeys skill metric that enables participants to acquire the skills for high-wage, high-skill jobs. The online curriculum was supplemented by individualized homework packets provided to participants in their native language. Prior to the program, jobs with participating employers were analyzed to establish the level of reading and math used on the job.

“It was an honor for us to play some small role in assisting these immigrants and former refugees in achieving the American dream,” says Tom Hadlick, executive director of the WorkKeys Center.” Hadlick explains how inspiring it was to watch Mayom and Ayobo succeed. “They fled from their homeland suffering hardship and persecution, overcoming barriers of culture and language to become contributing members of society,” he says.

ICM Controls in North Syracuse is another employer that participated in the Vocational English Second Language program. Tatjana Cukalevska from Macedonia has worked in quality control there since she came to the United States four years ago with her husband and two children. Cukalevska was one of 13 employees at ICM who completed the WorkKeys program in October and earned a silver certificate of Workplace Competency. The silver certificate means that Cukalevska now has the knowledge and ability to learn the skills of 65 percent of the entry-level jobs available in today’s market.

Ralph Taylor, a retired director of manufacturing operation, has more than 30 years’ experience in the industry. He is an instructor for the WorkKeys Program and was on hand to present the certificates. “Because of this program, communication barriers have been overcome,” says Taylor. “These people now ask questions if they don’t understand instruction. Before, they wouldn’t ask because they didn’t understand the answers.” Taylor congratulated the group and encouraged them to continue learning, using the modules that are available to them even though the official program was over.

Leonid Danielyan moved to the United States from Armenia 14 years ago. He has been employed as a printer at ICM for 13 years. Danielyan entered the WorkKeys Program to become more fluent in English and raise his level of computer literacy. He is committed to practicing his computer skills at home so that he will have broader access to music, movies and news. 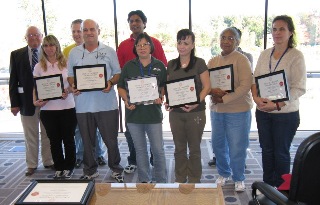 In addition to St. Joseph’s Hospital and ICM Controls, Loretto and Anaren Corp. also participated in the program. “All four employers reported that program participants made remarkable gains in their communication skills and self confidence,” says Hadlick. “Performance on the job increased and the participants began to participate in group meetings, respond in detail to questions from supervisors, and even left notes to help the incoming shift.”

Hadlick saysthat the project evaluation revealed that 90 percent of program participants acquired the level of work-related foundational skills necessary to perform all the tasks of their current job, and 71 percent acquired the skills necessary for the next job on the career ladder. In addition, 82 percent were awarded the Syracuse University Certificate of Workplace Competency.

“Several participants enrolled in college, three passed the U.S. citizenship exam and several were promoted,” says Hadlick. “That’s a remarkable achievement in the current economy. For me, the award ceremonies at Loretto and St. Joseph’s Hospital said it all. Each person voluntarily stood up and spoke eloquently about their positive experiences in the program.”

The program, funded by the New York State Department of Labor, also included supervisory training provided by the Westside Learning Center to help the employer develop a better understanding of the challenges facing immigrant and refugee employees.

To date, more than 4,000 individuals (job seekers, students and incumbent workers) have been assessed and/or trained by the WorkKeys Center and more than 50 employers have benefited from the project. The center is housed at University College.  For more information, contact Hadlick, or Andrea German-Willis, assistant director, at (315) 443-5241 or workkeys@uc.syr.edu.