Syracuse University senior John Giammatteo has been named a 2011 Marshall Scholar by the Marshall Aid Commemoration Commission of Great Britain. The highly selective and prestigious award is presented annually to as many as 40 intellectually distinguished young Americans to support their graduate study in the United Kingdom. 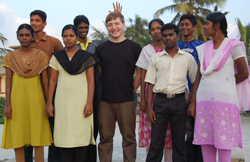 Giammatteo, a dual anthropology and magazine journalism major in SU’s College of Arts and Sciences and the S.I. Newhouse School of Public Communications, respectively, is the first SU student to receive a Marshall Scholarship.

Founded by a 1953 Act of Parliament and named in honor of 1953 Nobel Laureate Gen. George C. Marshall, former U.S. Secretary of State (1947-1949), the scholarships commemorate the humane ideals of the post-World War II Marshall Plan and express the continuing gratitude of the British people to their American counterparts. Marshall Scholars receive full support for two years of graduate study in the most prestigious UK universities, as well as research and travel grants.

Giammatteo’s interest in forced migration was ignited when, after his freshman year, he befriended a group of Karen refugees from Myanmar who resettled near his hometown of Southbury, Conn. The Karen state is a rural area in eastern Myanmar, bordering Thailand. Thousands of refugees have crossed the Thai border over the years to escape violence and political repression from the Myanmar ruling military junta, according to Refugees International.

“The Karen refugees were virtually abandoned by the agency that resettled them in Connecticut,” Giammatteo says. “Churches and other community agencies moved in to help out.”

When he returned to campus in fall 2008, Giammatteo enrolled in an Honors course that focused on refugees in the community. During the course, he met a group of Karen refugees who resettled in Syracuse through the Refugee Resettlement Program at the Center for New Americans, a program of InterFaith Works. His experiences with the Karen refugees helped drive the remainder of his undergraduate academic career.

Giammatteo decided to learn more about Karen refugees living in Thailand for his Renée Crown University Honors Program thesis and started working out travel arrangements. Before that goal was realized, however, he spent the fall 2009 semester in India, studying at the Vivekananda Institute of Indian Studies in Mysore through SU Abroad’s World Partnership Program. The institute is affiliated with the University of Iowa. While there, he did a month-long internship with the Organisation for Eelam Refugees Rehabilitation (OfERR), during which he completed an independent study of Tamil refugees who left Sri Lanka to escape civil war. Giammatteo’s study, “To Return or Stay,” was published in the journal Forced Migration Review (Vol. 35:52-53, 2010). Founded in 1984 by Tamil refugees, OfERR supports more than 100 refugee camps across India and works to prepare exiled Tamils to return to their homeland.

Giammatteo also spent a month in Sri Lanka working as a research assistant to Paul Greenough, professor of history at the University of Iowa, who was conducting a study of people displaced by the 2004 Asian tsunami. Last summer, Giammatteo realized his original goal and traveled to Thailand to conduct his own fieldwork for his Honors thesis. He connected with the research director of the Mae Tao Clinic in the city of Mae Sot, located near the Thai-Burma border, who introduced Giammatteo to a community of Karen refugees. The trip was funded in part by an Honors Program Crown Award.

“Throughout all of my travels, I probably learned as much about myself as I have about the people I’ve worked with,” Giammatteo says. “They are incredibly kind, caring and generous. They welcomed me into their homes and helped me define my path and figure out what I need to be doing with my life.”

In addition to his academic achievements, Giammatteo plays the organ. He currently is the organ scholar at Grace Episcopal Church in Syracuse and was the former assistant organist at St. Joseph’s Church in Bristol, Conn.

Additionally, Giammatteo received a Chancellor’s Award for Public Engagement and Service, a Community Research Fellowship from the Writing Program in The College of Arts and Sciences, and he is a member of the Lambda Alpha Anthropology Honors Society.