On Friday, Nov. 5, Syracuse University will celebrate the next big step in the construction of a new, landmark facility for the College of Law. The site for the future home of the College of Law will be dedicated at 3 p.m. in the Raynor parking lot on the SU campus. The celebration will recognize the members of the Dineen family whose naming gift of $15 million was given in honor of their parents, College of Law graduates Robert Emmet Dineen L’24 and Carolyn Bareham Dineen L’32 (pictured, around the time they got married). The surviving Dineen family children—the Honorable Carolyn Dineen King H’06, Kathryn Dineen Wriston and Robert E. Dineen Jr. L’66, will attend the site dedication, along with students, faculty and staff. 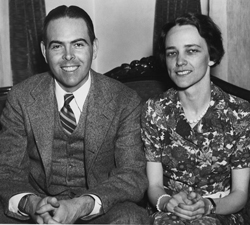 SU Architecture alumnus Richard Gluckman’70, G’71, of the Gluckman Mayner architectural firm in New York City, will be the lead architect on the building, which is projected to be approximately 200,000 square feet. It will be constructed on the site currently known as the Raynor parking lot, which is immediately west of the College of Law’s current buildings, E.I. White Hall and Winifred MacNaughton Hall, located on the western edge of the SU campus. The location is particularly meaningful to the Dineen family because it’s close to the Irish immigrant neighborhood, once known as “the swamp,” where Robert was born and raised.

“The Dineens are quintessential members of the SU family,” says SU Chancellor and President Nancy Cantor. “Robert and Carolyn Dineen exemplified the spirit of Syracuse University, and Bob, Kathy and Carolyn have built on that proud legacy. We are profoundly grateful for the leadership they have shown within the SU community. There is no more fitting legacy for this remarkable Syracuse family than to establish a new College of Law building named after their parents—two remarkable individuals whose own passion for law compelled them to triumph over enormous challenges.”

“I am truly humbled by the incredible generosity of the Dineen family,” says Hannah R. Arterian, dean and professor in the College of Law. “Their gift will have a transformational effect on the learning environment of our students. This new building will be an iconic symbol for the College of Law, giving it a strong sense of place that law students, faculty, staff, alumni and guests will consider an inspirational home. This gift makes a profound statement about the Dineen family’s legacy and their commitment to legal education at Syracuse University College of Law.”

Robert and Carolyn Dineen worked hard and sacrificed much to establish themselves in the law community.

Robert, a Syracuse native and the son of an Irish immigrant, had to choose between pursuing an undergraduate degree or going to law school (students at that time could go directly to law school without an undergraduate degree). He did not receive a law degree, but rather a “certificate of law.” After graduating in 1924 and deemed too young to practice law, he went to work as a claims adjuster for insurance companies in Upstate New York and Canada.

He applied for a job with local law firm Bond, Schoeneck & King in 1926. There was initial hesitation on the part of the partners to accept someone so young, but they hired him based on a personal reference. He later became a partner in the firm. Robert served as superintendent of insurance for the State of New York from 1943-50, and then joined Northwestern Mutual Life Insurance Co. Fifteen years later, he became the company’s president and CEO.

Carolyn Bareham Dineen, a Rochester, N.Y. native, faced challenges just by virtue of being a woman. She earned a bachelor’s degree and master’s degree from William Smith College and Columbia University, respectively, and enrolled in the College of Law as one of only two women in the class. She worked as a newspaper columnist to put herself through school as her father, who did not believe women should be lawyers, refused to help her financially with her education.

A pioneer among women, she earned a law degree at a time when comparatively few women were accepted into law school. Carolyn went on to establish a successful law career at the local law firm of Costello, Cooney & Fearon and met Robert when they were representing co-defendants in a lawsuit.

Following in the footsteps of their parents, Carolyn, Kathryn and Robert Jr. have all worked as prominent attorneys in their own right. Robert Jr. says one of the proudest moments his father—and his family—experienced was at SU in June 1966, when his father was awarded an honorary doctor of laws degree from the University, bestowed by then Chancellor William Pearson Tolley. At a celebratory lunch that followed, the elder Dineen made an observation on just how much his hard work paid off. It was first time he ever used the front door of Sims Hall on campus (he had previously always used the back door when making deliveries for the Syracuse Ice Cream Co.) The elder Dineen also said there could be no more jokes about how he was the only one in the house without a degree.

Robert Jr. says that Syracuse pride runs deep in every member of his family. “If my father and mother had not gone to the Syracuse University College of Law, Carolyn, Kathy and I would not be here today,” he said, speaking to College of Law students at the college’s annual Law Review Banquet in April. “Because of the opportunities and education that the College of Law provided to my parents, every member of the Dineen family owes their success to Syracuse.”

The Dineen family gift to the College of Law supports one of the five priorities of The Campaign for Syracuse University­—“building futures.” This campaign priority provides funding for infrastructure improvements—critical in today’s ever-changing world—to enhance SU’s teaching and research facilities and provide state-of-the-art technology, on campus, at the University’s regional centers in New York City, Los Angeles and Washington, D.C., and in its international study centers. With a goal of $1 billion, The Campaign for Syracuse University is the most ambitious fundraising effort in SU’s history. More information about the campaign is available online at http://campaign.syr.edu.