The Syracuse University Sport Management (SPM) Club will hold its sixth annual Charity Sports Auction on Saturday, Dec. 4, at the Carrier Dome. Silent bidding on hundreds of auction items, including sports memorabilia and hands-on experiences, electronics and tickets to major sporting events, will take place behind the court during the SU men’s basketball game against North Carolina State. Doors will open at 3 p.m. for the auction through Gates A, B, C & E. All other gates will open as usual at 3:30 p.m., prior to the start of the game. 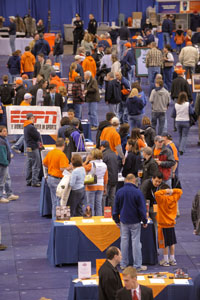 All of the proceeds from this year’s auction will benefit the CNY SPCA (Society for the Prevention of Cruelty to Animals). The SPM Club is a student-run organization in the College of Human Ecology’s David B. Falk Center for Sport Management. Since its founding in 2005, the club has raised nearly $100,000 for local charities, such as the Syracuse Boys and Girls Clubs, the American Diabetes Association of Central New York, Golisano Children’s Hospital at Upstate and the CNY Ronald McDonald House.

During the past five years, the SPM Club has been recognized with the Chancellor’s Award for Public Engagement and Scholarship and received the 2009 Orange Circle Award from the SU Alumni Association to honor SU alumni, friends, faculty, staff and students who have achieved extraordinary accomplishments in support of others.

“The commitment of our students to this event is well beyond an experiential learning experience,” says Kate Futrell, manager of career center and event planning in the Department of Sport Management, and 2010 auction chair. “For our students, this event is an important opportunity for them to make a difference in the Syracuse community. We truly couldn’t be prouder of each and every one of them and the amazing event they are organizing.”

Since its founding in 1891, the CNY SPCA has been on a mission to alleviate suffering, prevent cruelty and promote kindness to all animals. The CNY SPCA provides many services for the animals in the Central New York area, including adoptions, education, spay/neutering programs and cruelty investigations.

The purchase of a game ticket for the Dec. 4 Syracuse men’s basketball game will include access to the Charity Sport Auction. Tickets can be purchased on through SU Athletics at http://suathletics.com, or at the Carrier Dome Box Office. Tickets can also be ordered by phone at 1-800-DOMETIX. Follow the SU Charity Auction on Twitter at http://twitter.com/SU_SPM_Auction, or visit http://www.sucharitysportsauction.com.