To build on its longstanding commitment to veterans, Syracuse University will hold its inaugural Veterans Day Ceremony on campus beginning at 11 a.m., Thursday, Nov. 11. At the ceremony, the University will honor all veterans for their service and dedication. Grammy nominee Michael Peterson, the 2008 recipient of the Bob Hope “Spirit of Hope” award for his service to the nation and the servicemen and women of the armed forces, will sing the national anthem at the ceremony, to be held at Hendricks Chapel.

Military hymns will begin playing at 10:45 a.m. as guests arrive, before the historic chimes at Crouse College toll at 11 a.m. to announce the beginning of the ceremony. After dignitaries and veterans process into Hendricks Chapel, Dean Tiffany Steinwert will give the invocation, followed by Peterson’s live rendition of the national anthem. Brief commentary about the history of Veterans Day will be shared by Lt. Col. Ray Bowen, chair for SU’s Air Force ROTC, and U.S. Army Lt. Col. Sue Hardwick, chair for Army ROTC.

Highlighted during the ceremony will be SU’s commitment to providing educational opportunities for veterans, which began under the Montgomery GI Bill after World War II in the 1940s. Under that GI Bill, nearly 8 million WWII veterans participated in education or training programs. Despite its modest size, SU became a national leader in educating veterans as they rebuilt their lives in the war’s aftermath. Since then, the University’s large-scale commitment to educating and supporting veterans has continued with such programs as the Entrepreneurship Bootcamp for Veterans with Disabilities (EBV) at the Whitman School of Management, and the Yellow Ribbon Education Enhancement Program —a provision of the Post-9/11 Veterans Educational Assistance Act of 2008, also known as the New GI Bill.

The ceremony will continue with remarks by SU Vice Chancellor and Provost Eric F. Spina, and Melvin T. Stith, dean of the Whitman School, before veterans will be asked to stand in recognition for their service and dedication.

Peterson will perform a song he wrote for veterans, “You Could Hear a Pin Drop.” The song was written to acknowledge the sacrifice and value of veterans’ service. After the ceremony, a wreath will be laid on the Quad by ROTC Honor Guard cadets.

Following the raising of the flag, a luncheon will be held at noon at Panasci Lounge in the Schine Student Center. The reception is free. Individuals should RSVP by Wednesday, Nov. 3 to https://secure.www.alumniconnections.com/olc/pub/SYR/event/showEventForm.jsp?form_id=63335, or by calling (315) 443-2462. Seating is limited and pre-registration is required. 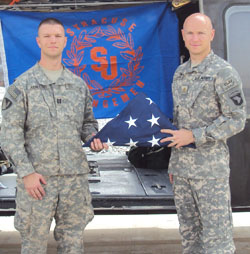 During the luncheon, photographs will be on display that capture the images of an American flag relay around the world. The flag was flown in places including Afghanistan, Fort Hood, Fort Bragg, Fort Drum and the U.S. Justice Department. The photo display captures the 13-city route, which began in Syracuse on June 14 (Flag Day). The flag relay will be completed on Nov. 11 with the flag being raised at Hendricks Chapel. After Veterans Day, the flag and case will be displayed in the Veterans Lounge at University College.