Music from Terezin will be featured in Nov. 7 Malmgren Series presentation

The Malmgren Concert Series at Syracuse University’s Hendricks Chapel will present The Hawthorne String Quartet: Music from Terezín on Sunday, Nov. 7, a special concert featuring music from Czech composers incarcerated at the Theresienstadt (Terezín) concentration camp during the Holocaust. 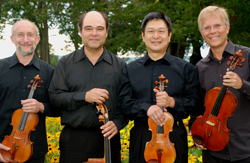 This performance, co-sponsored by the Regional Holocaust and Genocide Initiative in SU’s School of Education, will begin at 4 p.m. in Hendricks Chapel and is free and open to the public. Parking is available in the Irving Garage and in the University’s West lots.

The concert will feature music from Terezín as well as staples from the traditional quartet repertoire. Works by Beethoven, Haas, Klein and Ullmann will also be featured. A reception will follow the concert in the chapel’s Noble Room.

A pre-concert lecture by quartet member Mark Ludwig will be held at 3:30 p.m. in the chapel, prior to the concert, and is open to the public.

While in Central New York, the quartet will also perform for students, teachers and invited music teachers from the area at Jamesville-DeWitt High School on Monday, Nov. 8. The quartet will present school administrators with a curriculum that explores the lives and music of composers who perished in the Holocaust and provides an opportunity to discuss issues such as intolerance, human rights and artistic freedom.

The quartet has an expansive repertoire ranging from the classics of the 18th and 19th centuries to contemporary works. It has distinguished itself internationally by championing the works of composers persecuted during the Nazi regime, with an emphasis on the Czech composers incarcerated in the Terezín concentration camp.

In October 1991, the quartet performed in Terezín and Prague in ceremonies hosted by President Vaclav Havel to mark the opening of the Terezín Ghetto Museum and to commemorate the 50th anniversary of the first transports to Terezín. In November 2002, they performed additional concerts at the invitation of President Havel under the sponsorship of the U.S. State Department. The concerts were part of a diplomatic cultural mission to raise funds for Czech flood relief and restoration efforts at Pamatnik Terezín. Maintaining a close bond with the Czech Republic, the quartet has returned repeatedly for performances, master classes at the Prague Conservatory and film projects.

Displaying a diverse repertoire, the Hawthorne Quartet has produced a series of recordings featuring chamber music by composers Arthur Foote, Samuel Coleridge-Taylor, Thomas Oboe Lee and David Post, in addition to several motion picture and documentary soundtracks. Throughout its travels, the quartet has performed on radio and television programs worldwide and in documentaries.

The concert is part of the Malmgren Concert Series at Hendricks Chapel. The series was made possible by a generous gift to Hendricks Chapel from alumna Esther Malmgren ’42 in 1991. The free Sunday afternoon concerts, held throughout the year, feature a wide variety of music. Other scheduled performances in the 2010-11 Malmgren season are a Rising Star Recital featuring organist Chelsea Vaught (Feb. 20, 2011); and organist Jack Mitchener (March 27, 2011).

The Regional Holocaust and Genocide Initiative in SU’s School of Education seeks to enhance education, cultural production and public memory about the incidence of genocide, past and present. Faculty and student participants conduct curriculum research and develop coursework for grades K-6, and implement existing curriculum in grades 7-12, with support from the Spector/Warren Fellowship, which prepares SU students to teach about the Holocaust and genocide. Music, visual and dramatic arts events, including collaborations with the College of Visual and Performing Arts and Hendricks Chapel, broaden the project beyond the curriculum into public dialogues on law, justice and ethics.

For more information on the concert, call Hendricks Chapel at 443-5044.