Architectural designer and glass sculptor James Carpenter will speak at the Syracuse University School of Architecture on Tuesday, Oct. 12, at 5 p.m. in Slocum Hall Auditorium. His lecture, “Light in the Public Realm,” is free and open to the public. 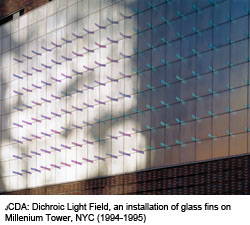 Carpenter is principal of James Carpenter Design Associates, a New York City studio recognized for its ability to straddle the fields of art, architecture and engineering to create architectural projects that transform the urban environment. Each work’s initial inspiration is light in transmission and becomes the guiding principal in designing a complete project. The studio has developed unique architectural projects and structural designs employing glass, steel, wood and composites for a variety of works, including museums, university buildings, commercial office towers and cultural facilities. Major projects include the redevelopment of the McKim Mead & White Farley Post Office as the new Pennsylvania Station in New York (2005); the completion of the exterior envelope and lobby of the Seven World Trade Center tower (2001-06) in New York; and the planning and design of the renewed campus of the Israel Museum in Jerusalem (2005-10).

Carpenter studied architecture and sculpture at the Rhode Island School of Design, graduating in 1972. He actively exhibited his sculpture and installation film projects in the United States and Europe and worked from 1972-82 as a consultant with Corning Glass Works in Corning, N.Y., where he worked on the development of new glass materials, including photo responsive glasses and various glass ceramics. These research projects were aimed at potential architectural applications, which would utilize the unique technical capabilities of these glasses to control and manipulate light and information, and this work eventually brought him back to the practice of architecture itself. This emphasis on theoretical, aesthetic and industrial materials research, together with Carpenter’s ongoing practice in architecture and structural glass design, continues to inform and guide the work of James Carpenter Design Associates.

Carpenter is the recipient of numerous awards, including the National Environmental Design Award from the Smithsonian Institution, the American Institute of Architects Honor Award and a MacArthur Foundation Fellowship in 2004.