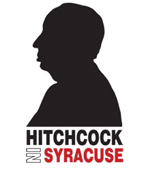 This October, the Syracuse International Film Festival (SYRFILMFEST’10) and Syracuse Stage will present “Hitchcock in Syracuse,” a series of events related to the work of the great filmmaker Alfred Hitchcock. Signature events will be SYRFILMFEST’10’s screening of “The Lodger” on Oct 15, featuring live music performed by jazz saxophone player Javon Jackson; and Syracuse Stage’s “The 39 Steps,” running Oct. 19-Nov. 7, featuring professional actors from across the country.

“SYRFILMFEST is very excited at the opportunity to collaborate with Syracuse Stage on this special tribute to Alfred Hitchcock,” says SYRFILMFEST Artistic Director Owen Shapiro. “We hope this will be the first of many more collaborative efforts.”

“‘Hitchcock in Syracuse’ offers Central New Yorkers a chance to experience, in multiple ways, the work of an American master. There’s film, theater, music, discussions … something for everyone,” says Syracuse Stage’s Producing Artistic Director Timothy Bond. “The value of the experience is far greater than one organization could accomplish alone. For this, we are grateful for the partnership with SYRFILMFEST and hope to continue our relationship on future projects.”

SYRACUSE STAGE: “The 39 Steps,” Oct. 19-Nov. 7
A comedic take on Hitchock’s classic film. “This gleefully theatrical riff on Hitchcock’s film is fast and frothy, performed by a cast of four that seems like a cast of thousands.” – The New York Times

SYRACUSE STAGE: Wednesday @ 1 Lecture Series, Wednesday, Oct. 27, at 1 p.m.
A lecture relating to “The 39 Steps” before the 2 p.m. performance, held in the Sutton Pavilion at Syracuse Stage.