Stone Canoe, a Journal of Arts and Ideas from Upstate New York, was featured in the fall edition of Central New York magazine. The magazine article focuses on the abundance of talent showcased in the journal, which is in production for its fifth edition. 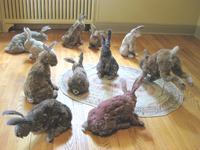 The journal has an eclectic mix of seasoned and new artists and contributors. Some of the artists/writers featured in the magazine were Ann Cofer, an adjunct faculty member in the Department of Fiber and Textile Arts at Syracuse University; Hayden Carruth, a well-known poet who taught at SU and passed away in 2008; Ann Knox, author and former editor of Antietam Review, who owns a home in the Adirondacks; A. Whitfield, an essayist and current inmate in a New York prison; Suzanne Proulx, internationally recognized artist and former fine arts instructor at SU; and Ann Reichlin, Utica resident and recipient of two fellowships in architecture/environmental structures from New York Foundation for the Arts.

The mission of Stone Canoe is to showcase the work of new artists and writers in the region, as well as new works by established artists and writers. According to Robert Colley, editor and associate dean at University College, “The established contributors are generous in offering us their work, which helps the journal’s reputation and in turn helps advance the careers of their less experienced colleagues. “

Stone Canoe, a Journal of Arts and Ideas from Upstate New York, is published annually in the spring by University College. Submissions are welcome from March through August each year, and cash prizes are awarded for outstanding work in each category.

How the NHL Is Paving the Way for Business Leaders Everywhere

Rick Burton, the David B. Falk Endowed Professor of Sport Management at Falk College, shared his expertise in Sports Business Journal’s article “Lessons through hockey as NHL joins busy slate.” In this article, Burton shares an excerpt from his new book…

Suicide Is A Leading Cause Of Death In The U.S., Despite Decrease During COVID-19

Shannon Monnat, professor of sociology in the Maxwell School, was featured in Grid for the story “U.S. suicide rates rose again in 2021, ending a brief decline during the covid pandemic.” The article highlights that despite the small decrease in suicide…

Scott Landes, associate professor of sociology in the Maxwell School, was quoted in Disability Scoop for their story “COVID-19 Was Leading Killer Of People With Developmental Disabilities.” The article explains how recent research shows that people with developmental disabilities were more…

Jeff Karson, professor of tectonics & magmatism of rifts and transform faults in the College of Arts & Sciences’ Department of Earth and Environmental Sciences, shared his expertise in Hollywood Reporter’s article “​​‘The Rings of Power’ Showrunners — and a…