Syracuse University has been named by G.I. Jobs magazine as a Military Friendly School for 2011. According to the magazine, the honor ranks the University in the top 15 percent of colleges, universities and trade schools nationwide that are doing the most to embrace America’s veterans. SU was also named to the military friendly list for 2010. 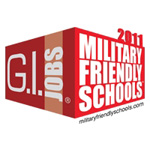 Schools on the list range from state universities and private colleges to community colleges and trade schools. Their common bond is their shared priority of recruiting students with military experience. In addition to education, institutions offer benefits to veterans that include on-campus veterans programs, credit for service and military spouse programs.

The list serves as a guide for veterans interested in pursuing higher education and was compiled through exhaustive research, during which G.I. Jobs polled more than 7,000 schools nationwide. Criteria for making the list included efforts to recruit and retain military and veteran students, results in recruiting military and veteran students and academic accreditations.

Military students bring maturity, life experience, diversity and leadership to college classrooms. The tens of billions of dollars in tuition monies now available with the passage of the Post-9/11 GI Bill last year have intensified an already strong desire by academic institutions to bring veterans onto their campuses.

A full story and detailed list will be highlighted in the magazine’s annual Guide to Military Friendly Schools and on a poster, both of which will be distributed to hundreds of thousands of active and former military personnel in late September. The newly redesigned website, http://www.militaryfriendlyschools.com, will show 2011 data in late September and features interactive tools and search functionality to assist veterans in choosing schools that best meet their personal educational needs.