Joseph W. Denn, a second-year graduate student in the Department of Languages, Literatures, and Linguistics in Syracuse University’s College of Arts and Sciences, received the Mary Hatch Marshall Essay Award at the Syracuse University Library Associates annual spring luncheon on April 30. His essay is entitled “Le Mariage de Figaro comme théâtre et opéra : une comparaison des deux spectacles” (The Marriage of Figaro as Theater and Opera: A Comparison of the Two Works). Denn is a native of St. Peter, Minn. 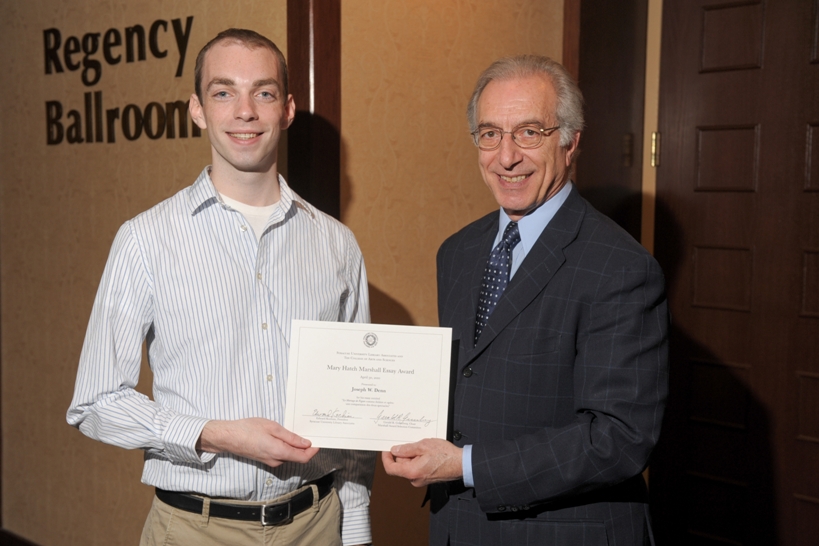 Joseph Denn, with the president of Library Associates, Ed Kochian.

To honor and help perpetuate Mary Hatch Marshall’s scholarly standards and generous spirit, Library Associates in 2004 established this annual award for the best essay written by a graduate student in the humanities at the University. Members of Library Associates, Marshall’s friends and family, the Gladys Krieble Delmas Foundation, and the Central New York Community Foundation all contributed to the endowment that funds this annual award.

Born in 1903, Marshall graduated Phi Beta Kappa from Vassar College, received a Ph.D. from Yale University, and was later named a Guggenheim Fellow. Marshall joined the SU faculty in 1948 and became the first woman to achieve the rank of full professor in The College of Liberal Arts. During her tenure, she held the Jesse Truesdell Peck Chair in English literature; helped to establish the Honors Program, serving as its first director; and was among the founding members of Library Associates. After retiring from full-time teaching with emeritus status, Marshall continued to offer courses through the Humanistic Studies Center at University College until 1993. Among the awards and honors she received were the Post-Standard Award for Distinguished Service to the Syracuse University Library, a Chancellor’s Citation, and an Outstanding Teacher of the Year Award.

Full- and part-time students from African American Studies; English; Fine Arts; Languages, Literatures, and Linguistics; Latino-Latin American Studies; Religion; Philosophy; the Writing Program; and the Women’s and Gender Studies Program are eligible for the $500 award. Nominations are coordinated by the respective department and program chairs.