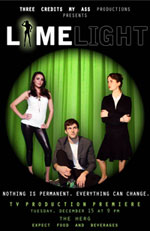 The six-part series chronicles the struggles a Hollywood talent manager faces in managing a child star’s transition to adulthood in the entertainment business. It was created through a collaboration of 21 students in the “Television Production” (TRF 452/652) course at Newhouse, taught by TRF chair Michael Schoonmaker. The students wrote, directed, acted in and produced the series, which can be seen online at http://orangetv.syr.edu (click on “Entertainment”).

“A College Television Award from the Emmy Foundation is the most prestigious honor for college students studying television, and it speaks to the impact of their writing and production achievements,” says Schoonmaker. “Though the series deals with a world far away from Syracuse, the ‘Limelight’ production team was able to develop a universally minded show about how we all struggle to transform our identities during the milestones in our lives.”

An award ceremony and gala were held on April 10 in Hollywood, Calif. Several of the students attended, including Andrews. “Going to Hollywood and representing the class was amazing,” she says.  “Of course it was fun to be in the same room as key industry players, but also to be in the room with representatives from other top film schools around the country was humbling and reminded me of what a blessing it was for our show to be nominated, let alone for us to win in our category.”

Lorraine Branham, dean of the Newhouse School, will recognize the students at a special reception today at 5 p.m. in the Joyce Hergenhan Auditorium in Newhouse 3. Two episodes of the series will be screened at the event.