New York attorney Paul Kerson will lead a discussion at Syracuse University about Nazi property seizure and the story of a long legal battle leading to recompense for elderly holocaust survivors on Friday, April 16, at 4 p.m. in the Peter Graham Scholarly Commons in E.S. Bird Library. Kerson’s presentation, “Reclaiming What Was Theirs,” is free and open to the public, and is co-sponsored by SU’s Renée Crown University Honors Program and the Judaic Studies Program. For more information, call (315) 443-2759. 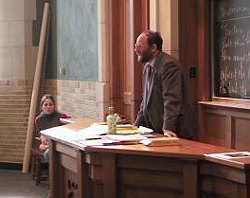 Kerson’s presentation will focus on Nacher v. Dresdner Bank, arguably the first U.S. corporate case involving Nazi-era atrocities. The case has its roots in pre-war Germany, when the Nazis stole, at gunpoint, a vast empire of factories and beer gardens from Ignatz Nacher. The spoils were diverted to Dresdner Bank, then one of Germany’s largest banking corporations, and became seed money for Hitler’s rise to power.

In the 1990s, Nacher’s nephew, Ferdinand, felt that he and other family heirs were entitled to more money than was granted them in a 1956 settlement in Berlin. Because Ferdinand lived in Queens and Dresdner ran a Wall Street branch, he sued the bank in Queens Supreme Court for operating while in possession of stolen funds. The landmark case eventually led to the establishment of the federal foundation “Remembrance, Responsibility and the Future,” which makes payments to Nazi victims during their lifetimes. Kerson was a driving force in initiating this case and in the creation of the foundation.

“This case provides innumerable lessons in ethics, law, international relations, faith, courage, imagination, the horrors of war and the value of tenacity in the pursuit of justice,” says Samuel Gorovitz, founding director of the Honors Program and professor of philosophy in The College of Arts and Sciences. “This journey inspired Paul Kerson to begin a book and to share his experiences with our university.”

Kerson is a partner of Koppell, Leavitt, Kerson, Leffler, & Duane LLP in Forest Hills, N.Y. Since earning a J.D. at Columbia Law School, he has practiced general litigation, criminal defense and personal injury.

The Judaic Studies Program, also in Arts and Sciences, exposes students to the riches of Jewish and Israeli history, culture and traditions. The program draws diverse course offerings from faculty throughout the University, providing students with invaluable knowledge of Jews and Judaism.