Loren Barrigar will perform a solo concert co-hosted by Women Transcending Boundaries (WTB), Syracuse Grows and the Northside Collaboratory. The concert will be held at Syracuse University’s Hendricks Chapel on Saturday, April 10, at 7 p.m. 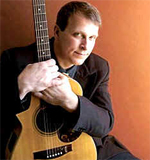 Barrigar, of the Barrigar Brothers, is a local favorite in Syracuse, playing at venues throughout the city as well as performing tour dates this year that take him as far as Tennessee. Barrigar started playing guitar at age 4 and performed at the Grand Ole Opry in Nashville with Chet Atkins at age 6. Before settling down in Central New York, Barrigar studied with Jimmy Atkins, Chet’s brother, which led to a national tour with the family band.

All proceeds will benefit the Isabella Street Tapestry Garden built in 2009 at 127 Isabella St., off N. Salina St. The garden serves a diverse neighborhood on Syracuse’s North Side, as many residents are recent immigrants from Burma, Bhutan and Burundi. The garden itself was built with donated materials from community members and proves to be a central gathering point for neighborhood gardeners.

Admission to the concert is $8 for adults and $5 for seniors, children and students (valid I.D. is required). Free parking will be available in the Quad 1 parking lot.