It’s all about love, and like love, it is never what you expect. Meet the people of Almost, Maine, a tiny town so far north Vermont is considered the South. One winter night with the aurora borealis creating celestial enchantment, eight couples fall under the spell of that funny little thing called love. By turns touching, comic, warm, gentle and altogether surprising, “Almost, Maine” is a funny Valentine of a play that will make you smile with your heart. 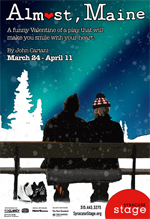 Running March 24-April 11 at Syracuse Stage, the play is co-produced with Geva Theatre Center of Rochester, where the production played to sold out audiences earlier this season. Tickets can be purchased online at http://www.SyracuseStage.org,  by phone at (315) 443-3275 or in person at 820 E. Genesee St. “Almost, Maine” is sponsored by J.R. Clancy, Residence Inn Marriott and the Syracuse Stage Board of Trustees. The Syracuse New Times is the media sponsor. Syracuse Stage season sponsors are The Post-Standard and Time Warner Cable.

Playwright John Cariani is an actor and playwright best known for his role as CSU Tech Julian Beck on television’s “Law & Order” and for his performance as Motel the Tailor in the 2004 Broadway revival of “Fiddler on the Roof,” for which he received the Outer Critics’ Circle Award and a Tony Award nomination. After establishing his career as a stage and screen actor, Cariani began his playwriting career in 2004 with “Almost, Maine,” which debuted at the Portland Stage Company and was named one of the best plays of the year by The Wall Street Journal. In 2006, “Almost, Maine” opened off-Broadway and has since been produced by some 300 theaters all over the United States, Australia, Germany, Korea and Mexico.

A free, 20-25 minute, intimate pre-show conversation with a member of the cast will be held prior to every performance of “Almost, Maine.” The starting time will be one hour prior to curtain, except Wednesday matinees, when patrons may enjoy the Wednesday @ 1 Lecture Series. Prologue is supported by the Grandma Brown Foundation.

Skip Greer, the director, serves as artist in residence and director of education at Geva Theatre Center. His directing credits at Geva include the world premiere of “The House in Hydesville,” “Doubt,” “American Buffalo,” “Inherit the Wind,” “Key West,” “Death of a Salesman,” “Lobby Hero,” “Below the Belt,” “The Weir,” “Women Who Steal,” “Beast on the Moon,” “Triumph of Love” and “Geometric Digression of the Species.” He directed “King Lear” at Shakespeare Santa Cruz. Other regional directing credits include Studio Arena Theatre, Repertory Theatre of St. Louis, Sacramento Theatre Company, State Theatre of Austin and Gary Marshall’s Falcon Theatre, where he directed “Golf with Alan Shepard,” starring Jack Klugman and Charles Durning.