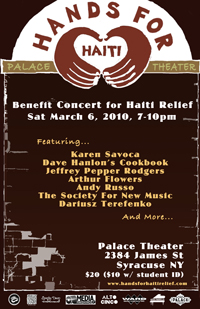 Proceeds will go to the Lambi Fund of Haiti, which works on sustainable development, the environment, animal husbandry, community micro credit and leadership training. The Lambi Fund of Haiti was founded in 1994 by Haitians, Haitian-Americans and North Americans. It works with women in Haiti and has partnered with the Green Belt Movement founded by Kenyan Nobel Peace Prize winner Wangari Maathai, who is helping the grassroots movement to plant more than one million trees in Haiti.

“It is tragedy that often calls forth the worst and the best of the human condition,” says performance poet and speaker Arthur Flowers, professor in the creative writing M.F.A. program in SU’s College of Arts and Sciences. “In the impulse to help those in need we find the best we have to give. I am proud and moved to be part of Syracuse’s contribution, an evening of blessings, this sanctification of the ground.”

“Everything about Haiti concerns me,” says Kenel Antoine, a member of the Haitian community in Syracuse. “I was born and raised in Haiti. From the horrific pictures on TV, I could have been one of those people that died. I’ve been grateful of all the support Haiti is getting from the world, as it lifts my spirits. I strongly believe through the support of the diaspora and elsewhere that things will get better.”

“I want to lend a hand in helping Haiti, and its people shape their future,” says Pavitra Ramaswamy, an international relations graduate student in the Maxwell School and a volunteer coordinator for “Hands for Haiti.” “It’s important for all of us to come out in solidarity for Haiti and carry their flame of hope in our hearts.”