This spring, the Dahesh Museum of Art will present “Becoming an Artist: The Academy in 19th-Century France” at Syracuse University’s Palitz Gallery, Lubin House in New York City, 11 E. 61st St. It is the second exhibition designed specifically for the Palitz Gallery as part of the partnership between SU and the Dahesh Museum of Art, and the third exhibition since the collaboration was initiated more than a year ago.

“Becoming an Artist: The Academy in 19th-Century France” will be on view at the Palitz Gallery from Monday- Saturday 11 a.m.-6 p.m., beginning Feb. 26. Admission is free. For more information, call Lubin House at (212) 826-0320 or visit http://daheshmuseum.org or http://lubinhouse.syr.edu. 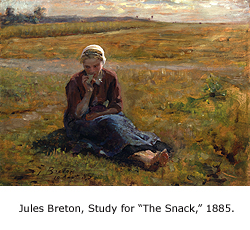 “Becoming an Artist” features a remarkable selection of 28 works drawn from the Dahesh Museum of Art’s distinguished collection, including paintings, sculptures and works on paper by well-known academic masters: William Adolphe Bouguereau, Théodule-Augustin Ribot, Henri Fantin-Latour and Jean-Léon Gérôme, as well as their lesser-known but equally popular contemporaries.

The exhibition, organized by Alia Nour, the museum’s assistant curator, explores the technical and intellectual training offered by the internationally famous Paris art school, the École des Beaux-Arts, the teaching arm of the Academie Française (French Academy). The flowering and international influence of the French Academy and the École des Beaux-Arts in the 19th century made Paris the artistic capital of the Western World, and aspiring artists flocked there. Those artists elected to the academy virtually ruled the French art world, and acceptance at the école was a crucial step to a successful career.

The exhibition highlights the rigorous, broad-based curriculum that attracted students from France and abroad, the competitions that rewarded excellence, the hierarchy of preferred subject matter and the unexpected variety of artistic expression generated by this exacting system.

“The recent resurgence of figurative art among younger artists and the proliferation of classically inspired ateliers and sketch classes across the country herald a new appreciation for the skill of drawing,” says J. David Farmer, director of exhibitions at Dahesh Museum of Art. “The rigor of academic training creates artists of astonishing technical ability. We owe it to ourselves to understand the education they received and passed on, as we move forward in educating artists today.”

“Drawing has long been thought of as an essential part of fine arts instruction, and quality draughtsmanship a hallmark of great figure painting and sculpture,” says Domenic Iacono, director of the SUArt Galleries. “At Syracuse, the studio arts programs have developed a foundation curriculum for students that incorporates the best of these traditions.”

“Becoming an Artist: The Academy in 19th-Century France” is the third exhibition organized by the Dahesh Museum of Art in its collaborative partnership with Syracuse University Art Galleries. “Napoleon on the Nile,” the first exhibition of this initiative, opened last fall on the University campus, where faculty developed educational programming around Napoleon’s failed colonial endeavor. In New York City last spring, “In Pursuit of the Exotic” opened at the Palitz Gallery. The exhibition was the inspiration for a standing-room-only evening of poetry and prose with the Poetry Society of America, featuring prize-winning poets Richard Howard and Rosanna Warren. Given the shared educational goals of each institution, as well as the public’s enthusiastic response, more exhibitions are planned for the future.