The question of how film and video bear witness to the historical trauma of the AIDS epidemic is the subject of a new book by Roger Hallas, assistant professor of English in Syracuse University’s College of Arts and Sciences. “Reframing Bodies: AIDS, Bearing Witness and the Queer Moving Image” (Duke University Press, 2009) draws on what Hallas calls “queer AIDS media,” which includes activist tapes, found footage films, autobiographical videos, documentary portraits, museum installations and film musicals. He says the book explores the AIDS crisis through the lens of the cultural, political and psychological imperatives it has engendered. 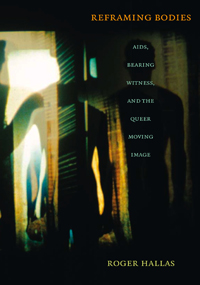 “Queer AIDS media are neither mere ideological critiques of the dominant representation of homosexuality and AIDS, nor corrective attempts to simply produce ‘positive images’ of people living with HIV/AIDS,” says Hallas. “Rather, they perform complex mediated acts of bearing witness to the individual and collective trauma of AIDS.” The author goes on to say that moving images ostensibly played a vital role in AIDS cultural activism during the 1980s and 1990s.

The goal of “Reframing Bodies,” says Hallas, is to challenge longstanding assumptions about the historical trauma and politics of gay visibility. In preparation for the book (which began as a doctoral dissertation in cinema studies at New York University), he studied hundreds of hours of AIDS-related footage from around the world, as well as consulted an array of scholars, activists and filmmakers. “I found that all these moving images were driven by an underlying testimonial demand for recognition by those directly affected by AIDS, articulating a sense of ‘I’m here, I count,’” he recalls.

“Reframing Bodies” takes on the entrenched media politics of who gets to speak, how and to whom by offering a bold reconsideration of the relationship among filmmakers, subjects and viewers. It also engages historical changes and media transformations that have not only recently displaced queer AIDS media from activism to archive, but also created new dynamics via remixing and online database practices. Such changes, says Hallas, are evinced by renewed interest in AIDS activism from the past three decades—from Harvard University’s recent exhibition “ACT UP/New York: Activism, Art and the AIDS Crisis, 1987-1993” to the books “Moving Politics: Emotion and ACT UP’s Fight Against AIDS” (University of Chicago Press, 2009) and “Infectious Ideas: U.S. Political Responses to the AIDS Crisis” (University of North Carolina Press, 2009) by sociologist Deborah Gould and political scientist Jennifer Brier, respectively. “We’re also seeing a whole new generation of students eager to study this recent but vital period of queer history,” Hallas observes.

Ann Cvetkovich, the Garwood Centennial Professor of English and Women’s and Gender Studies at the University of Texas at Austin, echoes these sentiments, stating that Hallas’ scholarship has helped HIV/AIDS activist media receive its critical due. “Through his passionate engagement, keen sensitivity to shifting contexts of reception and sophisticated account of the testimonial function of the moving image, he keeps this body of media alive for the future,” she declares.

Hallas is the author of numerous articles and essays, as well as co-editor, with Frances Guerin, of “The Image and the Witness: Trauma, Memory and Visual Culture” (Wallflower Press, 2007). He is a member of the college’s English faculty, long recognized for their innovative contributions to scholarship in and the teaching of literature, critical theory and film.