“Faculty Works,” a new series sponsored by the Syracuse University Humanities Center, continues with a presentation by Bruce Smith, award-winning poet and English professor in The College of Arts and Sciences. Smith will read from his forthcoming book of poetry, “Devotions” (The University of Chicago Press, 2011), on Tuesday, March 2, at 12:30 p.m. in the Leonard and Ruth Sainsbury Library on the third floor of the SU Humanities Center. The event is free and open to the public, and is preceded by a light lunch at noon. For more information, call (315) 443-7192. 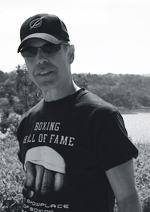 “Faculty Works”—organized by Edward F. Mooney, professor of religion and philosophy, in cooperation with the SU Humanities Center—highlights humanities scholarship in an informal setting. “We are delighted to present Bruce, who is a gifted poet and scholar, as well as an engaging reader,” says Gregg Lambert, Dean’s Professor of the Humanities and director of both the SU Humanities Center and Mellon CNY Humanities Corridor. “His presentation will, undoubtedly, trigger an interdisciplinary conversation that will last long after the event itself.”

Fans of Smith’s work might recognize parts of “Devotions,” which have already appeared in The New Yorker, The Nation, The New Republic, The Paris Review, The Partisan Review, Kenyon Review, Poetry, The American Poetry Review and the “Best of the Small Presses” series (Pushcart Press, 2007-09).

Smith’s five other books of poetry include “The Other Lover” (The University of Chicago Press, 2000), which was a National Book Award finalist and led to his nomination for the Pulitzer Prize.

He has held various faculty positions at Harvard, Tufts, Boston and Portland State universities; at Lewis & Clark College; and at the universities of Alabama and Houston.

“Bruce’s writing is very rhythmic,” says Lambert. “It’s like a good jazz solo that bristles and pops with excitement but keeps you hanging on every word.”

Mooney, who was “Faculty Works”’ inaugural presenter last fall, has high hopes for the series. “Our last event was filled with voices from philosophy, history, English, Jewish studies, religion and elsewhere, while faculty members, as well as graduate and undergraduate students who otherwise would have been anonymous to each other gathered to enjoy readings that cut through the disciplines,” he recalls. “These are occasions that link writing and books to delight.”

Based in the historic Tolley Building, the SU Humanities Center organizes and presents Syracuse Symposium for the college, as well as administers the Mellon CNY Humanities Corridor with SU, Cornell University, and the University of Rochester. It is also home to other cross-disciplinary initiatives, including lectures, symposia, professorships and fellowships that serve the campus community.