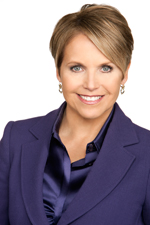 Couric is anchor and managing editor of the “CBS Evening News with Katie Couric” which, when it debuted in 2006, made her the first female solo anchor of a weekday network evening news broadcast. She is also a “60 Minutes” correspondent and anchors CBS News primetime specials. She has reported on and anchored from some of the biggest stories, domestically and internationally. She was previously co-anchor of NBC News’ “Today” for 15 years and also worked for WRC-TV, Washington, D.C.; WTVJ, Miami; CNN; and ABC News. She currently writes a monthly column for Glamour magazine featuring interviews with female role models, and hosts the weekly webcast @KatieCouric featuring interviews with top newsmakers.

The Mirror Awards luncheon ceremony will include the presentation of juried awards in seven categories:

In addition, two special awards—the Fred Dressler Achievement Award and the i-3 award for impact, innovation and influence—will be presented.

The Mirror Awards, established by the Newhouse School in 2006, honor the reporters, editors and teams of writers who hold a mirror to their own industry for the public’s benefit.