This fall, 20 third-year Syracuse University College of Law students participated in the 32nd annual Lionel O. Grossman Trial Competition. In the final round, held Nov. 4 at the Hanley Federal Building in Syracuse, the prosecution’s team of Kristen Jones and Sugam Langer beat the defendant’s team of Sam Davis and Joshua Werbeck. Langer received the award for Best Final Round Advocate. 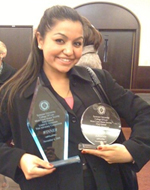 The competition is named after alumnus and founder Lionel O. Grossman L’16.

Syracuse University College of Law has one of the top-rated moot court programs in the country and has won the New York State Bar Association’s prestigious Tiffany Cup 14 times.