Gregory Wood, a member of the strings faculty in the Rose, Jules R. and Stanford S. Setnor School of Music in Syracuse University’s College of Visual and Performing Arts (VPA), will present a violoncello recital Wednesday, Oct. 14, at 8 p.m. in the Rose and Jules R. Setnor Auditorium, Crouse College. The concert is free and open to the public. Free parking is available in the Irving Garage. 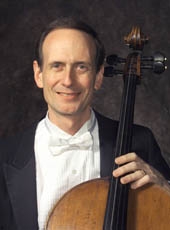 Wood, who is also assistant principal cellist with the Syracuse Symphony Orchestra (SSO), will be joined by two Setnor faculty members: pianist Ida Trebicka and violinist Peter Rovit, who gives his first performance at SU as assistant professor of violin. The program will include works by Debussy, Kodaly, Mark Summer and Clara Schumann.

A member of the SSO since 1978, Wood has performed with the orchestra at Carnegie Hall in New York and was also a member of its Baroque Ensemble. He has also performed with the Cincinnati Symphony Orchestra, including at Carnegie Hall and the Kennedy Center in Washington, D.C.; the Aspen Festival Orchestra; the Cassatt String Quartet; the Trans-Siberian Orchestra; and as principal cellist of the Cincinnati Pro Musica Chamber Orchestra. He is also an active recitalist in the Central New York area and has performed with the Syracuse Friends of Chamber Music, the Skaneateles Festival, the Society for New Music and Civic Morning Musicals.

Wood has performed as soloist with the SSO (1988 and 2003), Pro Musica Chamber Orchestra, the University of Cincinnati’s College-Conservatory of Music (CCM) Concert Orchestra as winner of the CCM Concerto Competition and with the Syracuse University Symphony Orchestra (SUSO). He received the 2006 Excellence in Chamber Music Performance award from Civic Morning Musicals.

As a chamber musician, recitalist and soloist, Rovit has performed throughout the United States and at the Spring in St. Petersburg Festival in Russia. Performances have included concert appearances on the Aspen Music Festival’s Young Artist Concert Series, with the International Sejong Soloists and on Baroque violin with the Rebel Ensemble and the Atlanta Baroque Orchestra. He has performed with such musicians as Andrew Jennings, Felicia Moye, Katherine Wolfe, Volkan Orhon, Christina Jennings, Ricardo Morales, Larry Combs and the Emerson Quartet.

A concerto competition winner at both the Hartt School and SUNY Stony Brook, Rovit has also performed as a soloist with the Montgomery (Ala.) Symphony, the Fort Smith (Ark.) Symphony, the Oklahoma City Philharmonic and the Tuscaloosa (Ala.) Symphony. He has been a recipient of the prestigious Montgomery Symphony Fellowship and the Aspen Music Festival’s String Fellowship, as well as the Kuttner Scholarship at Indiana University and the C.V. Starr Scholarship at the Juilliard School.

A native of Albania, Trebicka has performed throughout the United States, Europe and China as an orchestral soloist, recitalist, chamber musician and collaborative pianist. She has performed chamber music concerts with members of the Paris; Athens; Rome, Munich; and Bari, Italy, symphonic orchestras, as well as regular chamber music appearances with the musicians of the SSO. In Central New York, she performs regularly as part of the Society for New Music’s Cazenovia Counterpoint concert series and the Civic Morning Musicals concert series. She is also music director at St. Peter’s Episcopal Church in Cazenovia.

Trebicka is a recipient of numerous prizes, awards, scholarships and fellowships, including Albania’s most prestigious national piano competition, the SUSO Concerto Competition and the piano prize in the Civic Morning Musicals Competition.