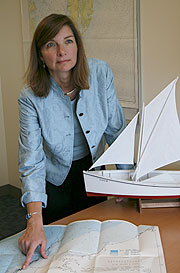 Mariners call the continental margin off the North Carolina coast the “graveyard of the Atlantic.” Syracuse University’s first Professor of Interdisciplinary Sciences, Cathryn R. Newton, sees the area as rich with fossils for paleontologists, marine archeologists and historians to study.

Newton was invited to deliver the plenary lecture at the 90th Annual Meeting of the American Association for the Advancement of Science (AAAS) Pacific Division, in San Francisco. She will present “Shipwrecks as Fossils” during a special session on Monday, Aug. 17, at 7 p.m. at San Francisco State University. AAAS is the world’s largest scientific organization and publisher of Science.

The lecture will provide the first view of a new, searchable database she has developed of some 2,038 ships that sank off the Southeastern coast of the United States, the earliest of which dates from 1526.

“This is the largest database on shipwrecks ever known for this area of the ocean—by a factor of two,” says Newton, dean emerita of SU’s College of Arts and Sciences. “It is a scientific tool that enables us to look at shipwrecks and what they can tell us in entirely new ways.”

The database includes ship names; type and size of the vessels; dates of sinking; information about the cargoes, passengers, ship departure points and intended destinations; and other information.

“Shipwrecks can be imagined as large fossils that sink to the sea floor much as deceased whales sink to the ocean floor and become part of the fossil record,” Newton says. “Like other marine fossils, shipwrecks provide clues to the part of our history that lies beyond the shoreline.”

Newton created the database from some 5,000 hand-written data cards on shipwrecks compiled by her father, oceanographer John Newton of the Duke University Marine Laboratory, and his research partners—Dorothy Nicholson of National Geographic, Harold “Doc” Edgerton of MIT, Gordon Watts of the state of North Carolina and Robert Sheridan, now of Rutgers University—more than 30 years ago. These scientists, two of whom are deceased, were part of the Duke University-National Geographic research team that discovered the legendary Civil War ironclad the U.S.S. Monitor a few miles off Cape Hatteras in 1973. Newton, then a 16-year-old sophomore at Duke University, was a member of that team.

Since the death of her father, Newton has sought to make this shipwreck information widely accessible to scientists and non-scientists alike. New database technologies and the Internet have helped bring the project to fruition.

The database will be published on the Web with the release of a book Newton is completing about selected shipwrecks, unlocking the information hidden in these fossil records. The stories include the circumstances surrounding the 1971 sinking of the Texaco Oklahoma off Cape Hatteras, German U-Boat attacks on passenger and merchant vessels during World War II, Newton’s first-person account of the discovery of the U.S.S. Monitor, and a discussion of shipwrecks and the arts.

“German submarines off the coast of North Carolina, babies born in lifeboats, people clinging to ice-laden rigging—every sinking is a human story,” Newton says. “The database allows us to pose new questions about these stories and to reach new understanding of the historical, cultural and scientific circumstances surrounding shipwrecks. From Shakespeare’s “The Tempest” to the sinking of the Titanic, shipwrecks hold endless fascination for us, and have been deeply woven into many aspects of our culture. We are now able, for the first time, to understand them not just as isolated events, but as populations amenable to quantitative scientific study.”