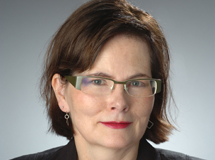 Dympna Callaghan, the William L. Safire Professor of Modern Letters and a renowned Shakespearean scholar in The College of Arts and Sciences, is serving as interim director of the SU Humanities Center. She gave the following responses to questions about her interest in the humanities and a proposed cut to the budget for the National Endowment for the Humanities.

Q: What is an experience that contributed to getting you interested in the humanities?

A: When I was a child, we would go to the public library every week. I loved the building, which was the most beautiful I had ever seen. I was enthralled by the magic of the books it contained because they allowed writers both living and long dead, writers from near and far off, to communicate with everyone who went in there and opened the pages of the books. The library was the place where the whole world and all of human history and imagination came to me and where, without paying a penny, I could enter the wide, wonderful world.

Q: Legislation introduced in the U.S. House of Representatives would slash the budget for the National Endowment for the Humanities for next year in half. Can you give us an idea of what kind of programs this would affect?

A: NEH funding supports a very wide range of cultural and educational projects and initiatives, including things like reading programs for children, the preservation of our nation’s historical records, community film series and creative arts projects in our inner cities. Such devastating cuts in funding would decimate the work of institutions such as libraries, museums and galleries. They would also destroy the work of communities and individuals engaged in creative and scholarly enterprise—students of all ages, artists, dancers, musicians writers, scholars and genealogists—all of whom enhance civic life and help to create an informed citizenry, which is the most vital element of our democracy.

Q: What is the value of the humanities to ordinary people?

A: The humanities are invaluable; you can’t put a cash value on beauty, creativity, on music, poetry, on young people being encouraged to express their creativity, on communities coming together to make art and appreciate it. Music, literature, philosophy, religious studies, painting, sculpture, film, photography, digital arts and history enhance our individual lives and our sense of social cohesiveness. Programs that support the humanities also recognize that education is lifelong, that we should all be allowed the opportunity to learn and grow creatively and to take pleasure in culture in all its diversity, both that of the past and of the present. Art and culture belong to all of us. The bill before Congress says these things don’t matter, but they only don’t matter in countries where the people don’t matter to those in power. Surely America is better than that.

Q: The House budget resolution states: “The activities and content funded by these agencies go beyond the core mission of the federal government, and they are generally enjoyed by people of higher-income levels, making them a wealth transfer from poorer to wealthier citizens.” What is your response to that?

A: Last year, the NEH sponsored “Emancipation Nation” to commemorate the 150th anniversary of Abraham Lincoln’s 1862 Preliminary Emancipation Proclamation, a crucial document in the progress toward the 13th Amendment, which outlawed slavery. When that document came to Syracuse last Fall on its eight-city tour of the state, courtesy of the New York State Museum, the turnout was amazing. There were lines around the block, and a very significant proportion of the people in those lines had ancestors who were slaves. But the line was made up of people of all stripes—black and white and brown, well-off and poor and in the middle, who waited patiently for well over an hour for the opportunity to see the document for themselves. This was not like the line for opera at the Met! There were no silk gowns or furs in evidence. These were the same people you meet in the corner store. This was a line made up of people from all over the city who felt that history—their history, our history—was important.

Those who think federal funding to preserve and maintain that history is a frivolity (along with its documents and the institutions that house them) would rob the poor, the ordinary, the middle-class and indeed, all but the extraordinarily wealthy, of their history and their culture. And we, the diverse nation that we are, all have a right to our history and our culture.

Q: What are some steps people can take to oppose cuts to the NEH budget?

A: The National Alliance for the Humanities suggests steps we can take to oppose the budget cuts:

4) Write to your local newspaper or news outlet.

5) Form a Humanities Working Group: If you would like to start or participate in a working group, contact Robert Madrid at rmadrid@nhalliance.org.