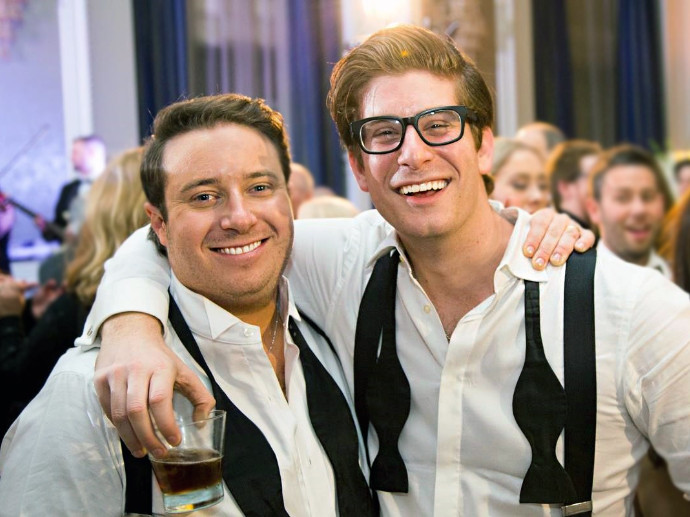 Ryan Fishman, left, and Alex Redlus at Fishman’s wedding in 2016

When Ryan Fishman and Alex Redlus arrived on  campus in 2005 to attend the Summer College program for high school students, they gained much more than college prep experience and familiarity with campus life. They gained a lifelong friendship. The two teens met in Booth Hall at the start of the program, which is administered through University College.

Fishman was enrolled in a program in the Newhouse School of Public Communications, and Redlus was in a theater arts program in the College of Visual and Performing Arts. “But somehow we both wound up in real estate,” says Fishman.

Their Summer College experience confirmed their desire to attend Syracuse University upon graduating from high school. “Summer College gave me a chance to really experience the University before other incoming freshmen and I knew that this was the place I wanted to be,” says Fishman.

Redlus says the experience helped him balance his academic and social activities, and he benefited by being familiar with Syracuse before beginning college.

“When I arrived in Syracuse (as a freshman) I knew enough about the town to be comfortable and could focus on other things besides finding my way around campus and the Syracuse area,” says Redlus.

“Really, it’s the best way to get acclimated to the style of classes you can expect in college, as well as the lifestyle of living in dorms and interacting with people with different backgrounds and experiences,” adds Fishman.

Fishman is also thankful for the connections and opportunities he gained while at Syracuse University. Matt Friedman, who attended the same Michigan high school as Fishman, was a Newhouse alumnus and connected him with Chris Bolt, a staff member at WAER. Bolt gave him the chance to work at the radio station while in the Summer College program.

“I got to work closely with Chris, which was a tremendous opportunity,” says Fishman. Another Newhouse alumnus, Kevin Rich, connected him with the manager of Z89, and Fishman was given on-air experience as well—all before his freshman year.

When the pair were accepted at Syracuse University, they spent the next four years cementing their friendship. “We were two peas in a pod,” says Redlus. After college they went their separate ways. Fishman went to law school in Detroit, Michigan, and Redlus moved to New York City to earn a master’s degree in real estate development and start his career in that field.

Being in different states has not kept them apart. They make a point of traveling to see each other and talk on the phone often. And, they’ve been together for all major life events.

“He stood up in my wedding in Detroit in 2016, and I returned the favor and stood up in his wedding in Westchester in 2017,” says Fishman. This past April, Redlus traveled to Detroit to meet Fishman’s new son. “We also have a few mutual business endeavors going on given our shared history—so from Summer College came something really special and lifelong.”

Fishman says the Summer College program was an amazing opportunity. “A lot of maturing happens in the first few weeks and months at college, so the opportunity to get this crash course in life is very unique. The program helps decide what you want for the future,” he says. “Maybe you won’t like the major you’ve chosen and you get a chance to change that. Maybe you’d rather be on a city campus, or maybe you’ve found the perfect place and the perfect program at Syracuse University.”

“And, if you like the program you are in and decide to attend Syracuse University, you may have your Summer College professors again during your academic career and understand their expectations. You can also explore other subjects you’re interested in,” adds Redlus.

“I would say, and I think Alex would agree, that Syracuse is a very special place,” says Fishman. “We have a lot of friends and developed very unique relationships while on campus—both personal and professional.”

Dear Faculty, Instructors and Graduate Teaching Assistants: We are writing to provide you new information from the Onondaga County Health Department related to the COVID-19 vaccination distribution process. Eligibility Reminder At this time, per the New York State Department of…