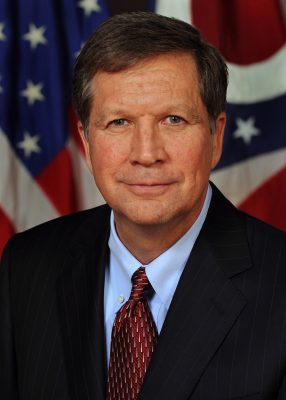 Ohio Gov. John R. Kasich will be the keynote speaker at the award celebration for the Toner Prize for Excellence in Political Reporting on March 27 in Washington, D.C.

The Toner Prize, sponsored by the Newhouse School, honors the life and work of late alumna Robin Toner ’76, the first woman to be national political correspondent for The New York Times.

“We are honored to host Governor Kasich as the Toner speaker this year,” says Newhouse Dean Lorraine Branham. “As a former presidential candidate who has been outspoken about the role of the media, he brings an important voice to an event that highlights high-quality political journalism.”

Kasich was sworn in as Ohio’s 69th governor in 2011. During his time in office, he has closed an $8 billion budget shortfall without a tax increase, reduced taxes by $5 billion and created nearly 450,000 jobs.

Kasich served as a member of Congress for 18 years. As the chairman of the House Budget Committee, he led the effort to balance the federal budget for the first time since 1969 and helped enact historic welfare reform.

After leaving Congress in 2000 and running for President, Kasich worked as a managing director in the Investment Banking Division of Lehman Brothers. He was also a commentator for FOX News and a Presidential Fellow at his alma mater, The Ohio State University. He again ran for President in 2016.

Kasich is the author of three New York Times best-sellers: “Courage is Contagious” (Bantam Doubleday Dell, 1998), “Stand for Something: The Battle for America’s Soul” (Grand Central, 2006) and “Every Other Monday” (Atria, 2010). His new book, “Two Paths: America Divided or United” (St. Martin’s Press), will be published on April 25.

This is the seventh year the $5,000 prize has been awarded in a national competition. Past awardees include Alec MacGillis of ProPublica, Dan Balz of The Washington Post, Karen Tumulty of The Washington Post, Molly Ball of The Atlantic, Jane Mayer of The New Yorker and Craig Harris of The Arizona Republic. This year’s winner will be announced at the ceremony in March.

Toner graduated from Syracuse with a dual degree in journalism and political science. She started her journalism career with The Charleston Daily Mail in West Virginia and reported for The Atlanta Journal-Constitution before arriving at The Times in 1985. She was married to former journalist Peter Gosselin and was the mother of twins, Nora and Jacob.

The late U.S. Sen. Edward M. Kennedy described Toner as “a reporter’s reporter who deeply cared about the people and the issues she covered.”

The event will begin at 6 p.m. at the Center for Strategic and International Studies, 1616 Rhode Island Ave. NW, Washington, D.C. Tickets and tables may be purchased online at tonerprogram.syr.edu. For more information, contact Audrey Burian at 315.443.1930 or aaburian@syr.edu.