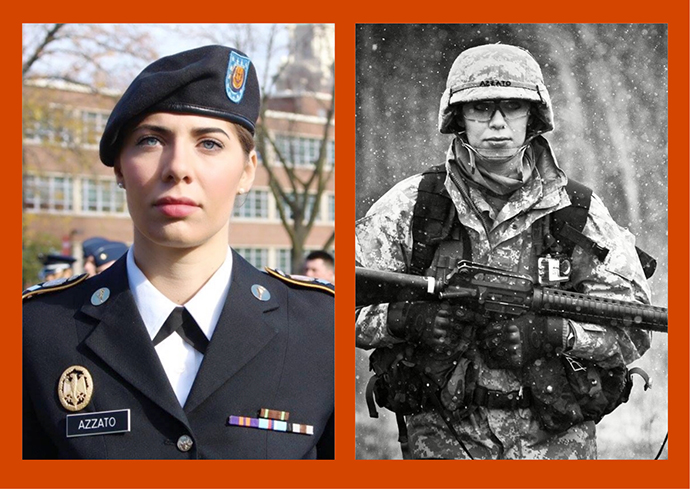 Kyra Azzato ’17 will become the first woman from Syracuse University—and among the first few in the nation—to attend Infantry Basic Officer Leader Course.

For Kyra Azzato ’17, looking back on it, the vision really began on the day she arrived at Syracuse University to join the Army ROTC battalion. It was built upon the officers and teachers in charge of the program. She studied the way they supervised cadets, the concern and command they always showed during training in the field.

It led to an aspiration that seemed impossible. Azzato listened as many of her friends spoke of their plans once they left college, how they intended to “branch infantry,” the expression for going into combat arms.

While Azzato wanted the same thing, she could do little more than wish out loud. American women were barred from taking that step. In the 98-year history of Army ROTC on the Syracuse campus, no woman graduate had ever been allowed to pursue a combat role because of federal restrictions.

In three months, Azzato will be commissioned as a second lieutenant in the Army infantry. She will become the first woman from Syracuse University—and among the first few in the nation—to attend what’s known IBOLC, or Infantry Basic Officer Leader Course. Eventually, she will go on to Army Ranger school.

The task will involve a gantlet of mental and physical challenges. If everything works out, she could accomplish her dream: She could become leader of an Army platoon that might someday be called into combat. 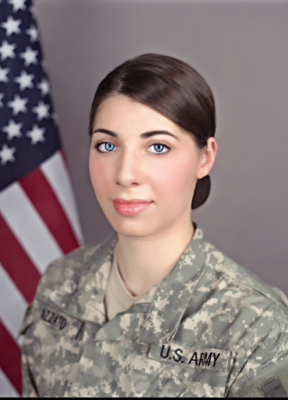 “This doesn’t surprise me,” says Xavier Whitehead, who was a master sergeant at Syracuse when Azzato arrived. “I could see the potential early on.”

Azzato, in all ways, downplays her own achievements. But her officers and teachers aren’t so restrained. They note how she carried a 3.8 GPA into her final semester as a senior, how she is pursuing a dual major in broadcast and digital journalism in the Newhouse School of Public Communications and political science in the College of Arts and Sciences and the Maxwell School of Citizenship and Public Affairs, and how she has never missed a semester on the dean’s list.

She accomplished all of that while excelling at her ROTC duties.

“I’ve been teaching for years, and I can’t say I’m in awe of many students, but I’m in awe of her,” says Associate Professor Suzanne Lysak, Azzato’s advisor in the Newhouse School.

Making her achievements all the more remarkable: Until the end of her senior year of high school, Azzato wasn’t even aware of ROTC. That changed quickly, once she was accepted in the program. At Syracuse, she began a quick ascent through leadership positions, from team leader as a freshman to battalion commander as a senior. Along the way, she became aware of a simple, aching truth:

“Everyone knew it,” she says. “My heart was in combat arms.”

To make history, Azzato had to be in the right place at the right time. In December 2015, then-Secretary of Defense Ash Carter announced that women would be eligible for combat jobs in every branch of the military. While many servicewomen had already experienced combat in Iraq and Afghanistan, this was the first time they would be officially eligible to fight—and potentially to lead a combat platoon.

Azzato approaches the opportunity with appreciation, and humility. She knows other female cadets who came before her at Syracuse might have made the same decision, if they’d had the chance. 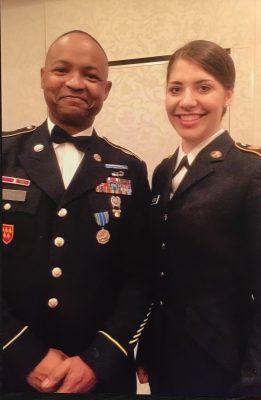 But Whitehead, the master sergeant she describes as a life-changing influence, says her personality is built for this kind of challenge.

“She’s very determined, and so focused, and she definitely has a wherewithal, a tenacity,” says Whitehead, now in Texas. “She has a focus and a vision, a very long view of things when most people have a very short view of things.”

He remembers when the Syracuse cadets were doing a field training exercise on a raw and snowy day. They were at Fort Drum in the North Country, moving through the woods, when “Azzato caught a branch in the eye,” Whitehead says. The injury might have caused many young people to go back to the base.

“She slapped a patch on it,” says Whitehead, who watched with admiration as she finished the exercise. Cadet Mitchell Alan Hovis, a senior who also intends to “branch infantry,” says he and his friends, from that point on, began calling her “Patchy.”

It was a nickname built upon respect. When there’s a problem, Hovis says, Azzato “won’t just step back and watch. She wants to be in there, fixing it.” He remembers her disappointment when women remained ineligible for combat training, and her joy at the news when that situation changed.

Whitehead often speaks of her tenacity and resilience. Azzato, in turn, credits her officers and mentors with inspiring those qualities. She says there was such a power to the camaraderie and friendship within ROTC that it caused her to embrace the ideals of the infantry.

“For me, it’s the individual people I see every day,” she says. “I fell in love with taking care of my cadets.”

She expressed particular gratitude toward Whitehead. The master sergeant influenced her life, she says, as much as anyone she’s ever met.

“He’s not an easy person to please, but he makes you want to be a better person, in and out of the Army,” she says. “He never lets you settle for anything less than excellent.”

She remembers the moment she arrived at Syracuse, a teenager wearing civilian clothes, with no real idea of what ROTC would entail. She remembers the jolt of that first day, when she picked up her uniform. She remembers when Whitehead unexpectedly made her class leader, sensing something in her she had yet to find herself. 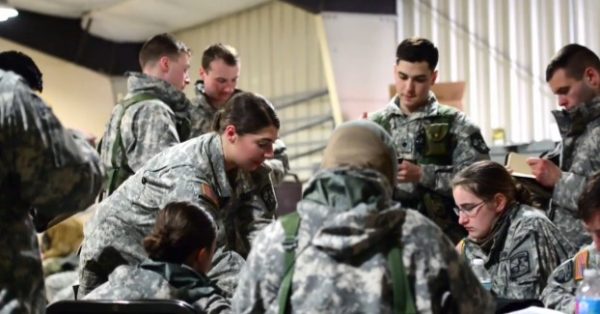 There is an old tradition, a high honor, on the day you are commissioned: You offer a “first salute” to an officer with particular meaning in your life.

This May, when that day comes for her in Syracuse, Azzato hopes Whitehead will be there.

That patient drive, that “long view of things,” began early. Azzato grew up in Emporium, Pennsylvania, and attended Cameron County High School. She is the oldest child of Bret Martz, a corporal with the Pennsylvania State Police, and Kara Martz, who works at a school for children with high needs.

For Azzato, the idea of looking out for others was a way of life: Throughout her childhood, her parents often cared for foster children.

At school, she was an honors student who ran track, played basketball, served on the debate team and somehow found time for a job, waiting tables. Her long-term plan, until her senior year, was becoming a journalist. When the deadline neared for choosing a college, many of her friends chose to stay close to home. Azzato went online and discovered Syracuse University and the Newhouse School.

She was accepted. She needed to come up with the tuition.

A stranger at a track meet gave her a key to the solution. She had just finished running a race when a man by the fence called to her and says: “You run well. You ought to think about joining ROTC.” Azzato thought about his words. She went home, studied what Army ROTC offered and decided to apply.

She can tell you the exact moment when she learned of the response: Her mother was cooking dinner, and she was sitting at a kitchen counter, when she opened a letter informing her she’d earned a scholarship. 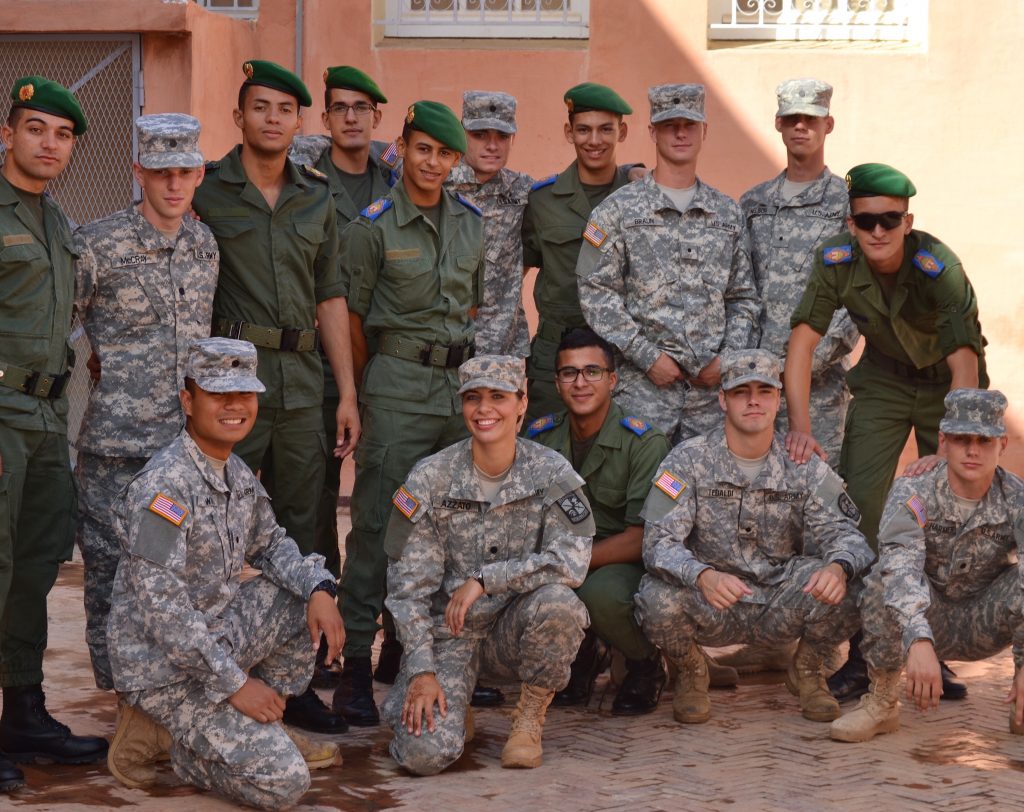 It was a turning point. Almost five years later, in a low-key and steady way, she is about to make history at Syracuse.

“Throughout our time in ROTC, we learn about the different branches” of the Army, Azzato says. Every cadet must choose a path to follow upon being commissioned. One day, Sgt. 1stClass Ryan Jensen asked her which way she was leaning.

Once the rules changed, Azzato made that choice.

She understands the nature of that decision. She will confront formidable challenges, including a requirement to “ruck” for miles at a fast pace, carrying a heavy pack. “A lot of people are skeptical of a woman branching combat arms,” she says.

Her response is to do everything she can to be prepared. When she arrived at Syracuse three years ago, Cadet Julissa Myers was battalion commander. Azzato was impressed by Myers’ presence, by the confidence and respect she inspired in her fellow cadets.

It was a quick lesson in what hard work and discipline could achieve. 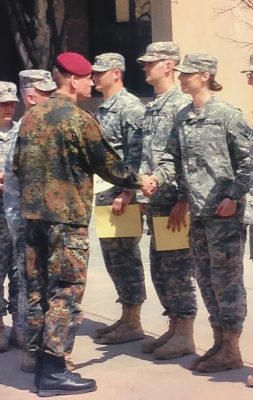 Before long, Azzato realized the core elements of the infantry appealed to her. Lt. Col. Jason Warner, the officer in charge of Army ROTC at Syracuse, says Azzato has a unique set of leadership qualities. He remembers when the Syracuse Army ROTC did a joint training exercise at Cornell University, and Azzato was in charge of 100 cadets.

“She’s a very strong person,” he says. “She’s chosen a path that will challenge her. But she’s demonstrated that she has the skill and talent to meet that challenge.”

Lysak, her advisor at Newhouse, recalled when Azzato would routinely show up at 6:30 a.m. for a 7 a.m. course. She described Azzato as one of the most organized people she’s ever. Most important, Lysak says, Azzato is a “natural leader,” a student who quietly exudes a strong presence in the classroom yet listens intently to what other students say.

“She is a person who has strong judgement, but also always seeks out guidance,” Lysak says. “She’s just a terrific young woman, and I’m very proud of her.”

Beyond her double majors, Azzato can also speak three languages, including Arabic. She has traveled for ROTC summer training programs to Jordan and Morocco. Her plan is no longer to find a job in journalism: She expects to spend her career in the Army, which is why she was so pleased to learn that Whitehead—her first master sergeant at Syracuse—hopes to be here on graduation weekend in May.

Warner says 24 Syracuse University Army cadets—including nine women—hope to be commissioned. Azzato, with her eyes set on a milestone, intends to turn and offer Whitehead that “first salute.” As she prepares for combat training, a challenge no other woman graduate in Syracuse University history has ever faced, Azzato says Whitehead helped provide her with this simple confidence:

“Whatever happens,” Azzato says, “this is what I’m meant to do.”

Dear Students, Faculty, Staff and Families: Over the last several weeks, the University has provided a lot of information about return to campus, including related to move-in, testing, quarantining, campus life, etc. We recognize that all this information can be…