This past June, the United States Supreme Court ruled, in a historic decision, that same-sex couples have the constitutional right to marry. What many people don’t realize, however, is that the gay rights movement actually began a century earlier in Germany. 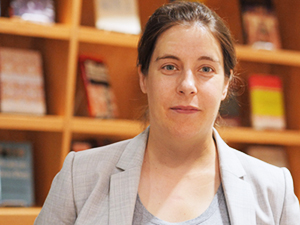 In her authorial debut, “Sex and the Weimar Republic: German Homosexual Emancipation and the Rise of the Nazis” (University of Toronto Press, 2015), Laurie Marhoefer, assistant professor of history in the Maxwell School of Citizenship and Public Affairs and the College of Arts and Sciences, explores the rise of sexual tolerance through debates surrounding “immoral” sexuality: obscenity, male homosexuality, lesbianism, transgender identity, heterosexual promiscuity and prostitution. The book is intended for scholars and lay people alike.

“I hope readers will see that gay, lesbian and transgender activists have been forced to make trade-offs,” says Marhoefer, who lived in a commune in Berlin and learned to speak German while researching her book. “Many [early activists] didn’t think that they could win equality and liberation for all LGBT people. Rather, they tried to win it for the ‘better sorts’ of LGBT people. As a result, they actually ended up throwing rowdy working-class types ‘under the bus,’ so to speak—sacrificing them, in order to win political victories that benefited people they deemed respectable.”

“Sex and the Weimar Republic” follows the sexual politics of a swath of Weimar society, ranging from sexologist Magnus Hirschfeld to Nazi stormtrooper Ernst Röhm. Tracing the connections between toleration and regulation, Marhoefer has created something relevant to the politics of sexuality today.

Elizabeth Heineman, professor and chair of the Department of History at the University of Iowa, calls it an “ambitious book.” “Marhoefer asks us to reconsider the politics of sexuality in the Weimar years—including its role in bringing Hitler to power,” she says. “’Sex and the Weimar Republic’ is carefully researched, broad in its scope and packs important insights for those interested in queer politics today.”

“’Sex and the Weimar Republic’ makes a compelling argument about the importance of sexual politics writ large—in the Weimar Republic,” says Robert Moeller, professor of history at the University of California, Irvine. “It is an important book, of interest to those who study 20th-century Germany and to those interested in the history of sexuality.”

Marhoefer says the project both personally and professionally significant.

“Publishing this book culminates an 11-year quest to research and write a book about the world’s first LGBT movement, in the course of which I traveled all over Germany and had many adventures and made sacrifices along the way,” she says. “Professionally, if the book is well-received by historians, it’s like you’ve arrived as a real historian. I’m also excited to make an extended contribution to the conversations going on among scholars about the history of LGBT rights and of Germany. And I think that it’s really important to understand the first gay rights movement, because it set the model for movements that came after it, including the one that is shaping our lives today.”

Marhoefer, who joined the Syracuse faculty in 2009, earned a Ph.D. from Rutgers University in 2008.