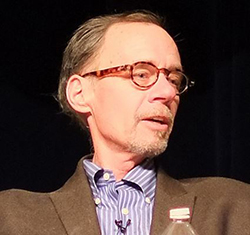 David Carr was honored posthumously at the Newhouse School’s Mirror Awards this past June in New York City for his impact, innovation and influence in the field of journalism. For the past 25 years, Carr wrote about media as it intersects with business, culture and government. He was also the author of the memoir “The Night of the Gun” (Simon and Schuster, 2008).

Produced by Syracuse University’s Office of Electronic Media Communications, the documentary will also air on WNET Sunday, Aug. 30, at 2 p.m. WNET Thirteen is PBS’s largest market, with its programming seen in the New York Metropolitan area, Connecticut, New Jersey, Long Island and parts of Pennsylvania. Central New York viewers will also get the opportunity to view “Remembering David Carr,” as WCNY will air the show this fall. The show’s producer and director, Stu Lisson, credits his staff and PBS with helping raise the profile of Syracuse University and its productions.