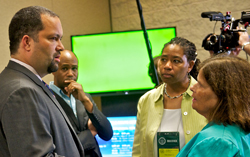 Events from the 2nd day of the NAACP Convention in Orlando, Fl. During its annual national convention in Orlando, the NAACP will vote on a resolution in which the Cold Case Justice Initiative (CCJI) at Syracuse University (SU) played a substantial role in drafting. The Georgia NAACP chapter submitted the resolution which was approved by the resolution committee of the nation’s oldest and largest civil rights organization prior to the convention.